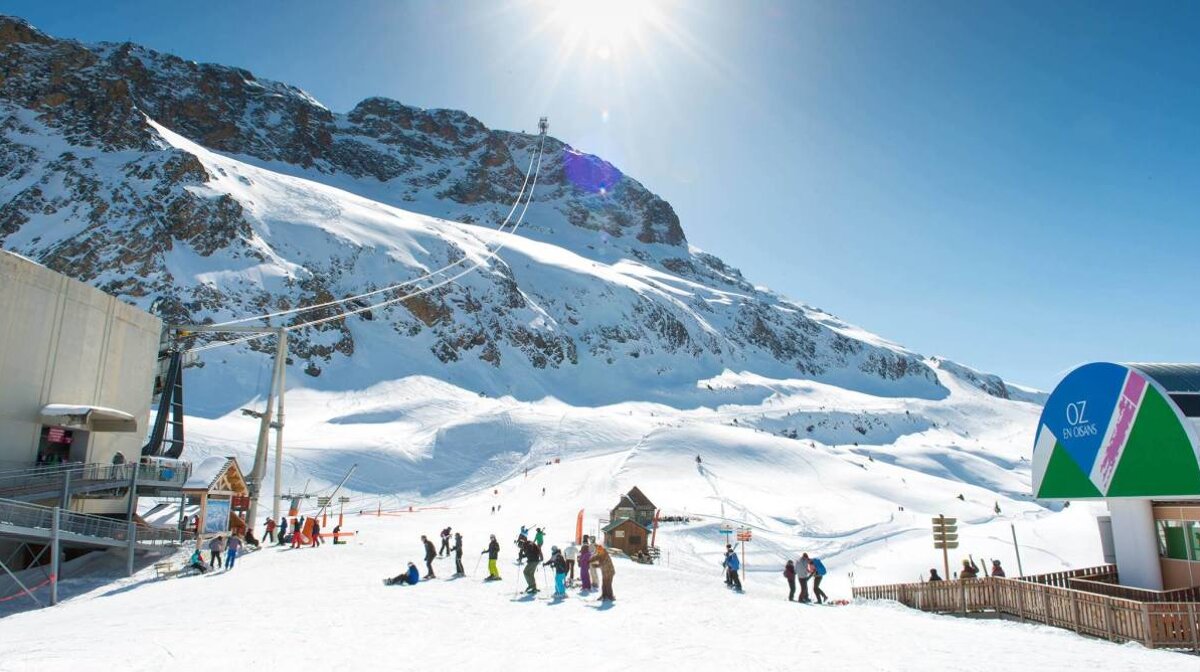 The resort of Oz en Oisans serves two purposes. Firstly it is a holiday village in itself and secondly it gives skiers joint access to the Vaujany ski area.

From Alpe d'Huez, the Oz ski area is accessed by taking the first stage of the DMC (or any of the button lifts alongside) and then the north facing steep Poutran red run (see the piste maps). On each side of this run are large amounts of off-piste, but beware, the off piste on the left (north facing) is extremely avalanche prone. Although this looks like a wonderful terrain of gullies and ridges, if you enter this area without Arvas or avalanche bleepers or indeed have no previous experience of off-piste skiing, you will be taking a great risk. You have been warned!

Poutran red run splits into two parts; the first drop is a steep red usually in excellent condition and although there is an alternative blue path which circumnavigates the red, it meets up with the red at its steepest point and a nervous red runner will be challenged.

After the intermediate flat section, there is a choice of runs. Continuing down Poutran will give you a narrow tree-lined piste of red standard called L’Olmet, but there is also a beautiful blue run called Champclotury, access to which is often missed as the piste maps are a little indistinct. At the end of the flat section of Poutran, a small access button (Champclotury) takes the skier to what appears to be an access to the return bubble car. Continuing under the lift station will bring the skier to the blue Champclotury run. The red and blue runs culminate before arriving at the Oz bowl where you will find the areas' nursery tows and one of the areas two 'travelator' lifts (a conveyor belt style of lift).

About 100 metres before the foot of the bowl, sharp-eyed skiers will need to watch closely for the right-hand branch taking you in the direction of the Alpette lift (also signposted Vaujany). Taking this lift does not necessarily mean that you are committed to the Vaujany area as from the top, you can return to Oz via the Alpette run. This takes the form of a good red with spectacular ice falls at the side. In a good season when the snowfall is plentiful, the point at which this Alpette run intersects the Champclotury starts a superb black (Roche Noir) through the trees, which again culminates at the bottom of the Oz bowl.