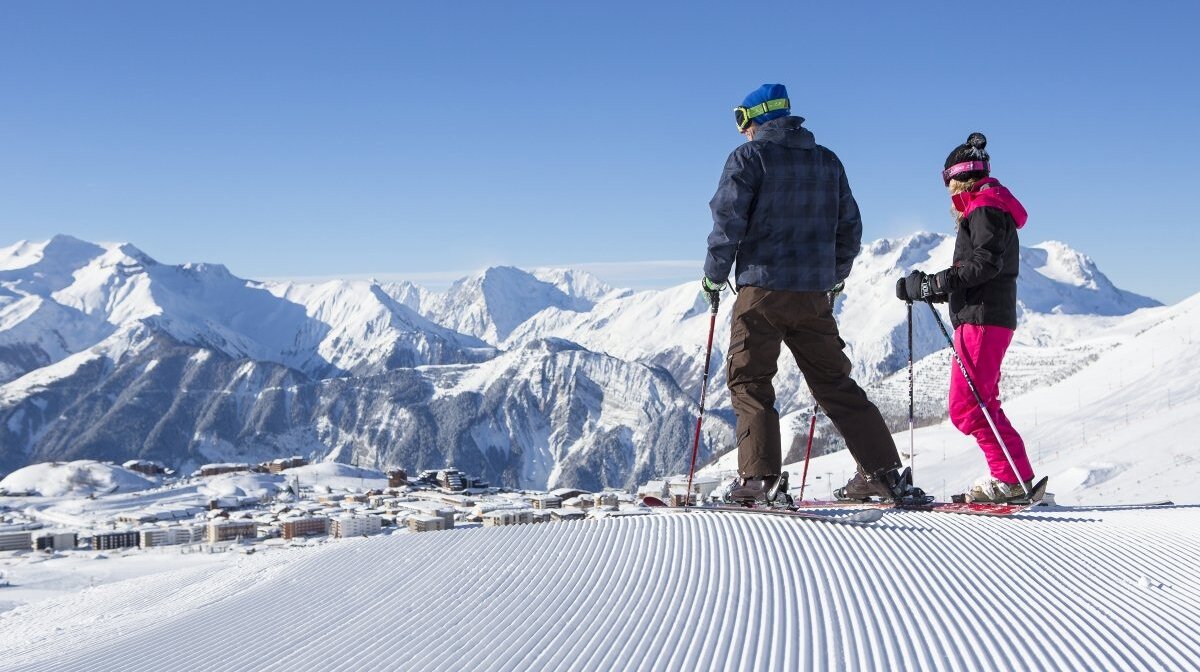 Discover the best of the Alpe d'Huez ski area

Alpe d’Huez Grand Domaine has 249kms of pisted runs to explore and infinite off-piste possibilities, so you will find terrain to suit everyone here. There are 84 ski lifts here giving access to 41 green pistes, 34 blue pistes, 40 red pistes and 16 black pistes (see the piste maps). On top of this there are two snowparks, a boardercross park and a halfpipe. 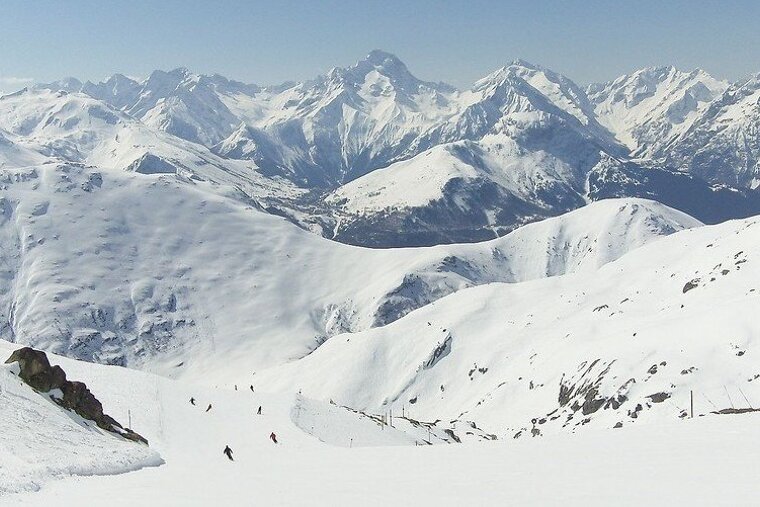 Alpe d'Huez has some amazing skiing for all different levels and abilities. The ski area is home to the longest ski run in Europe, La Sarenne (16km) and the infamous ‘Tunnel’ run, which is for experienced skiers and thrill seekers only.

The gentle slopes on the outskirts of the resort provide the perfect terrain for beginners to build their confidence on and intermediate skiers will find plenty to entertain themselves with on the network of blues and reds, and runs from the top of the Pic Blanc provide challenges for the more advanced (see the piste maps).

Set in a large sunny bowl, the resort is aptly named ‘l’Isle au Soleil’ (Sunny Island) due to the high percentage of sunny days it enjoys throughout the year. Snow conditions permitting, it’s open from early-December until the end of April.

From its highest point, at the Pic Blanc (3,330m), you can enjoy a breathtaking panorama over the Ecrins National Park, La Grave, La Meije, Les Deux Alpes and Mont Blanc, before skiing the 2,175m of vertical drop down to L’Enversin d’Oz at 1125m.

It is worth taking note of where you are staying to get the best out of the ski area. Those choosing to stay in the main resort will get the best choice of skiing as its central location in the ski area allows easy access to all levels of pistes. The smaller villages that link into the area can offer a more charming and peaceful base and each has its own quick and easy access the main ski area. You can buy ski passes for these smaller villages only but for those wanting to get the most out of a trip here, we'd recommend buying a Grande Domaine ski pass which covers the whole area.

Higher Runs of Alpe d'Huez (West Facing)
Ascending the west-facing slopes by the Télécabine 1er Troncon at the top of resort (DMC to the locals) will access the massive green rolling runs primarily known as Les Jeux. In fact, from the first stop of the DMC, there are no less than seven wide green pistes nearly a mile long rolling back to the centre of the station. To access the higher runs of the area, you must continue to the top of the DMC lift (Deuxieme Troncon) at 2700m.  From here you have two options - the blue Couloir and the red Chamois pistes both return to the midpoint of the DMC and eventually back to resort, or you can take the Les Rousses red run that accesses Vaujany. Taking the Couloir, a busy blue, finds one on a long 'flattish' section which continues straight along a 'pushing mandatory' path to the Marmotte Restaurant and Les Bergers.

Pic Blanc Area
The Troisieme Troncon to Pic Blanc begins at 2700m and ascends via cable car to the top point of the Alpe lift system, Pic Blanc (3330m). From here the views are stunning and offer a panorama over an area equal to one fifth of France.

The start of the runs from here cannot be seen from town as you must first descend a steep section labelled Sarenne and Tunnel before turning to the right at the end. Continuing along the narrow path one is faced with a square building, at one side of which is a narrow snow filled tunnel some 200m long which opens out onto the Tunnel black run (this is a serious black run..). Return to Alpe d'Huez is achieved by following the routes that lead to the deuxieme troncon of the DMC. There are also some superb off-piste runs from the bottom of the first section of the Tunnel but much care must be taken as the avalanche danger is high in this area.

The Marmotte lift from Les Bergers has three sections, all separate. The second section has two notable blacks from it – the Cloche de Macle is the easiest black in the resort; short and steep but relatively wide, and the Les Balcons run, found by turning left at the top of Marmotte two. Les Balcons is never pisted and often closed and its off-piste character can develop into a very steep bumpy run, challenging Tunnel for difficulty. The bottom of this run liaises with the top of the Lievre Blanc chair that ascends from the mid-station of the DMC.  Other blacks from Marmotte Two include the Combe Charbonnier that runs towards the old Mine de L'Herpie, again off-piste and very south facing. 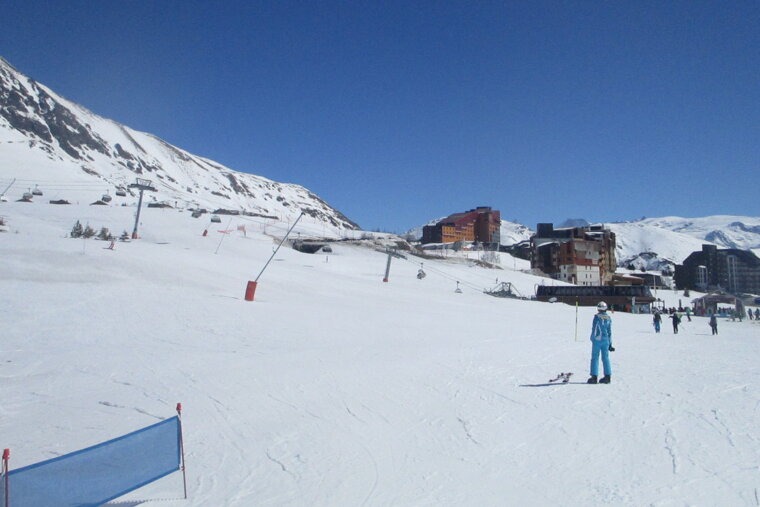 Alpe d'Huez is an excellent place for beginner skiers with the large area known as Les Bergers offer a number of gently rolling green runs that lead back to resort. This area is a low-speed zone to allow beginners space to improve. The area served by the DMC 1 (lower lift) is also great for beginners with plenty of wide green runs. The DMC area is located at the end of the famous “Lobster pot” lift system and as such is easily accessed from anywhere in resort without the need for walking around with your gear.

For complete beginners, the Petit Rif Nel, Ecoles 2 drag lifts and the Grenouilles rope tow are free of charge. You can also buy a "First Ski" which allows you on all drag and chair lifts in Alpe d'Huez except the Alpauris and Marmottes 1 chairs.

Over in Auris en Oisans & Vaujany, beginners skiers are spoilt for choice with a number green pistes from the centre of the resorts, with access to lots of drag lifts. There are also 7 runs available in Villard Reculas. 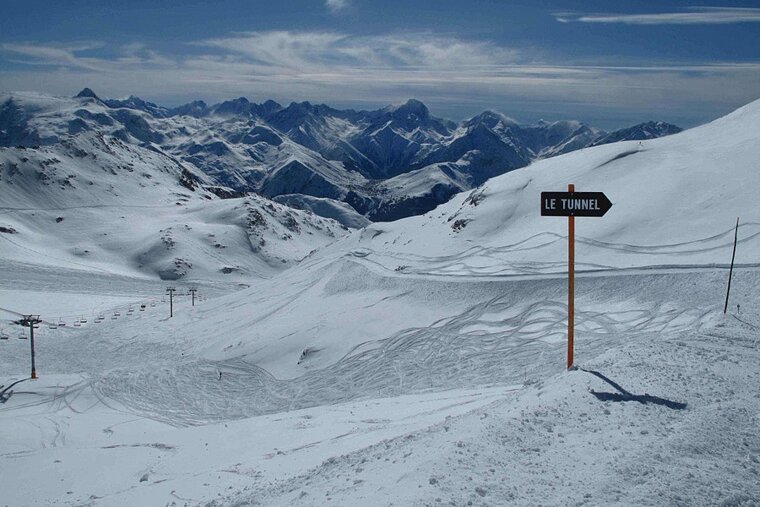 Alpe d'Huez has plenty of long and challenging blacks and decent reds so for those in search of long, thigh-burning pistes and bumpy mogul fields will not be disappointed.

The black Tunnel run beneath the Pic Blanc cable is one them. The pitch is of standard black steepness but can be very hard in the mornings due to late afternoon sun, and super-mogully in the afternoons, so it is not for the faint-hearted. Another spectacular run is the Sarenne, a long run of 17km or so and a stunning descent of around 2000m altitude...the perfect thigh-burner. 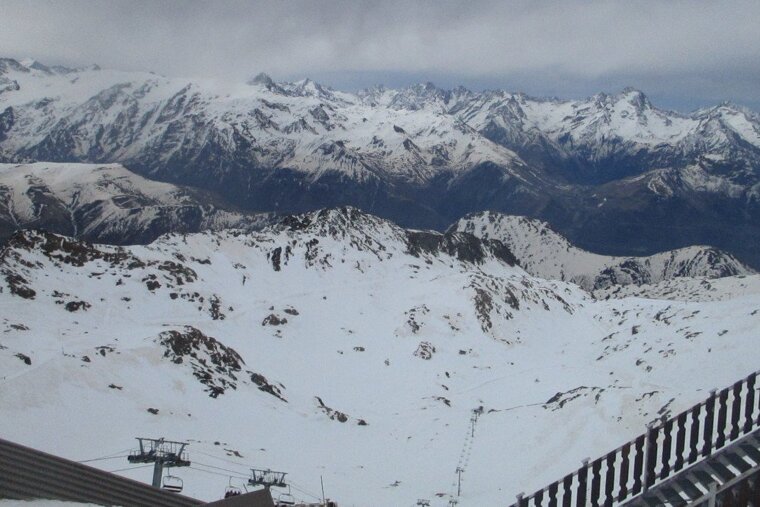 Alpe d’Huez has a large selection of off-piste skiing for those who like to venture off the slopes and marked pistes. There is a great selection of off piste and advanced terrain and with a connection to the famous La Grave off piste area it is a must for all off piste thrill seekers.

Always make sure you are prepared before embarking on off-piste skiing or snowboarding, check out our Avalanche Safety page for tips on what to do before setting off. It is also always advisable to hire an off-piste guide who will have extensive knowledge of the area and the mountains.

Please note: you ignore safety warnings and barriers/ropes and undertake off-piste skiing/boarding at your own risk. We always recommend that you take a mountain guide when heading off-piste. 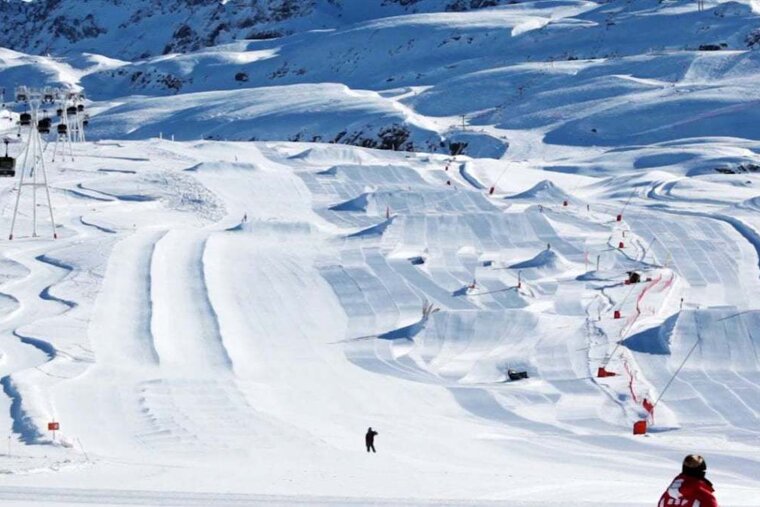 There are two snow parks in Alpe d'Huez, one in Montfrais and a larger one beside the beginner runs above 1800, most easily accessed from the DMC 1st station. Although this park is larger in size it is very beginner friendly with a number of small features providing a gentle introduction to park riding.

Entering the park there is a sign indicating the four approximate difficulty levels from right to left – beginner (green), easy (blue), intermediate (red) and expert (black). Each route through the park has 3-4 boxes or rails and 4 kickers (jumps). Ski schools often have parts of their lesson here and other beginners can be found having their first experiences of park skiing. 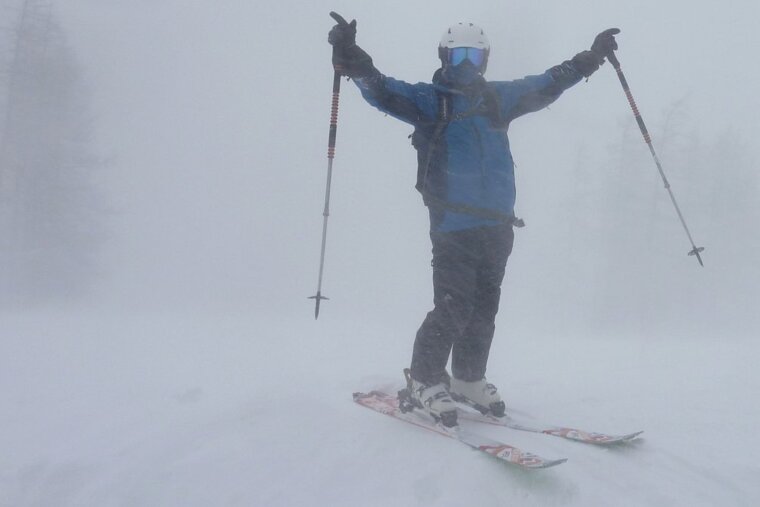 Where to go when the cloud comes in, the snow starts to fall and you find yourself in white out conditions.The high, open pistes lack the contrast required for orientation during white out conditions and slope and sky can blur into one. The trick is to head for the pistes that are tree-lined, as they help provide definition when everything else seems to be white. Keep in mind that the valley itself can be covered in an all-encompassing fog, but the top of the mountains can be bathed in glorious sunshine (check out the webcams).

Also, if it’s lashing down with rain in the valley, it means it’s snowing up top, giving you the best and freshest powder you’re likely to ski on. And because it’s a bad weather day, chances are, you’ll have the mountain to yourself.

Take a look at this year's Ski Pass Prices or, if you're not sure which pass to buy. 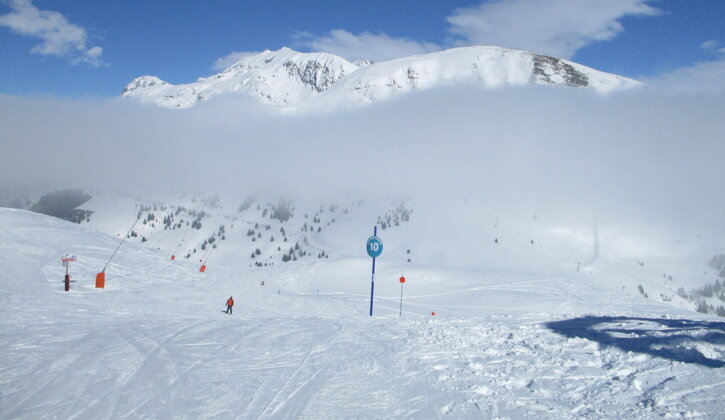 Quiet, wide open pistes on the Auris en Oisans side 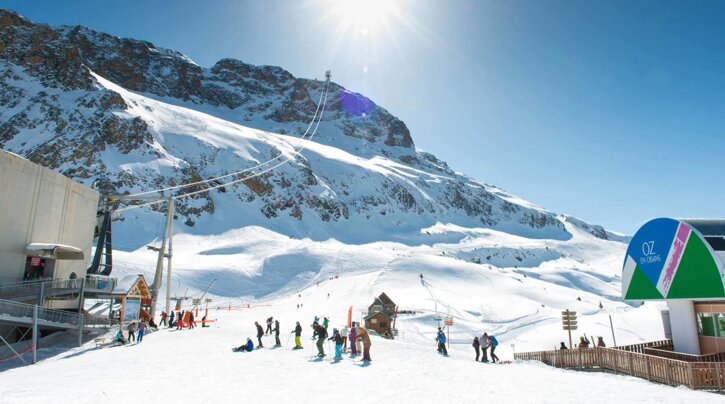 A wide range of runs for every ability 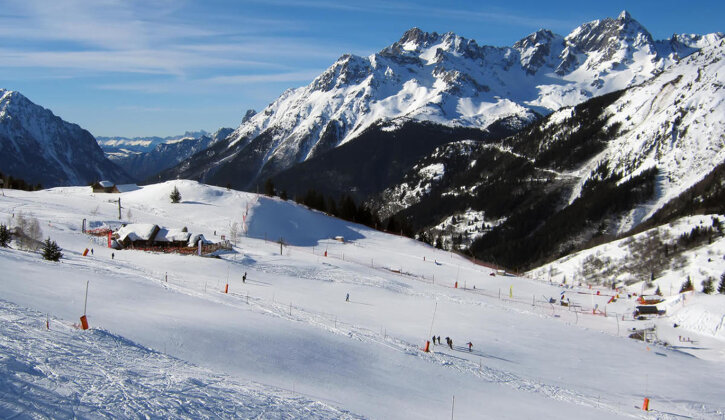 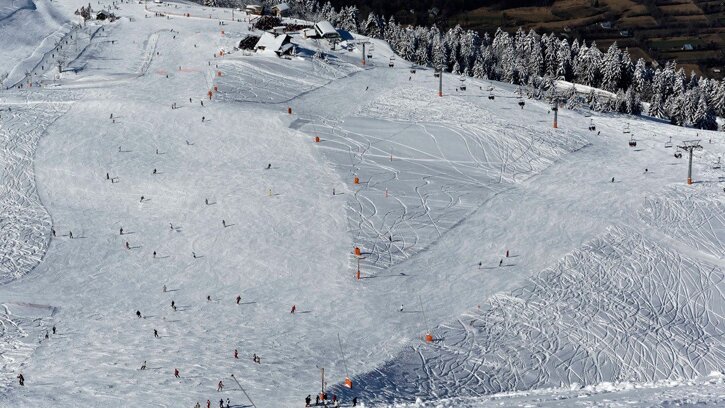 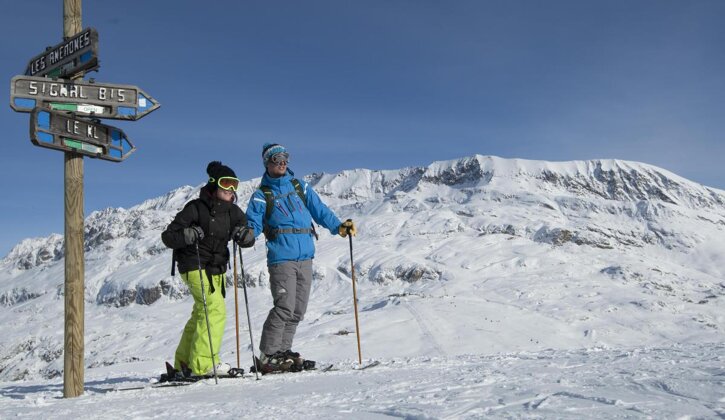 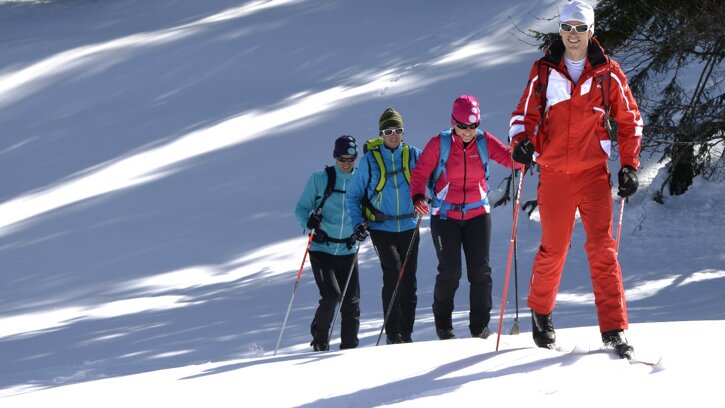 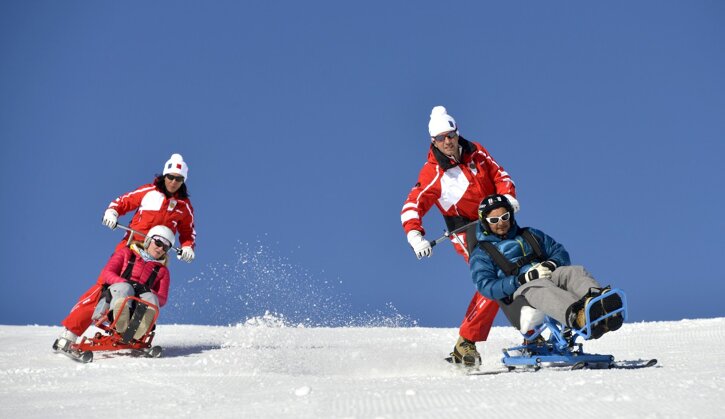